The first iAd for iPad was launched this week for the upcoming Disney blockbuster Tron Legacy. 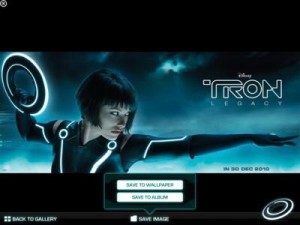 It is believed to be the only iAd planned for Apple‘s tablet for this year. The format will be launched widely in early 2011. We haven’t seen it yet, but understand that the first iAd for iPad is full of rich graphics, touch navigation and video.

The full-screen Tron ad includes close to 10 minutes of video, images from the movie, a theater locator with showtimes, and a preview of the movie soundtrack with the option to purchase on iTunes without having to leave the ad.

For the first time in any iAd, users are also able to send emails straight from within the ad. Apple’s mobile ads have previously only run on iPhones and iPhone Touch devices.

There are understood to be that more than 7.5 million iPads have been sold worldwide. However, when iAd for the iPad launches fully in early 2011, the ads will only be seen in the U.S. iAds on iPhones are available in the U.S., U.K. and France, though they’ll be available in Germany and Japan in 2011.

Apple got into the advertising business after acquiring mobile ad network Quattro Wireless early this year.

This is the second time that Apple has used a Disney film to demonstrate a new ad format. Disney’s Toy Story 3 was part of the initial launch of the iAd on iPhones and iPods in April. (Steve Jobs, Apple’s co-founder and CEO, is Disney’s largest single shareholder and sits on its Board of Directors.)

This entry was posted on Thursday, December 16th, 2010 at 09:55 @455 and is filed under DailyDOOH Update. You can follow any responses to this entry through the RSS 2.0 feed. You can leave a response, or trackback from your own site.