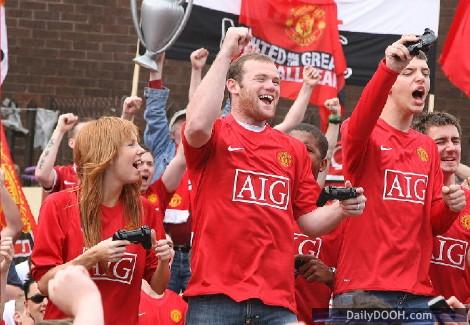 The ‘Theatre of Dreams’ (aka Manchester United’s Football / Soccer Stadium Old Trafford) is, courtesy of Matchday Media’s 200 x MDM.TV in-stadia Screens getting an exclusive repeat peak of an Electronic Arts TV commercial only previously shown on SKY TV – in fact it was only ever first shown during the half time interval of last week’s Chelsea v Manchester United game.

The commercial itself stands out as something of a 4 minute masterpiece and won rave reviews amongst armchair football fans (for you could not have seen it if you were at the game!!!) and has been much talked about.

It’s all rather clever and looks great and to any die-hard Manchester United fan something that they would not wish to miss.

So here we see Mediacom being rather clever on EA SPORTS behalf and getting the advert repeated in the ‘Theatre of Dreams’ to over 150,000 fans during the next two Premier League fixtures at the Old Trafford stadium.

He added “EA SPORTS FIFA 09 needs to be close to the beautiful game and the MDM.TV network allows us to talk to football’s most passionate and active fans – hence our use of their complete stadium network for our standard FIFA 09 creative”

Our industry needs to help the Media Planners come up with many other clever uses of TV material as possible, so hats off to all those involved in pioneering this.

This entry was posted on Friday, September 26th, 2008 at 11:27 @519 and is filed under DailyDOOH Update. You can follow any responses to this entry through the RSS 2.0 feed. You can leave a response, or trackback from your own site.

2 Responses to “‘Theatre of Dreams’ Gets EA SPORTS Exclusive”