Want it or not, digital signage is today an integral part of our urban scene. It’s there to entertain, inform and, in some cases, enhance our city landscape. This, at least, is the opinion of Kevin Beaulieu, CTO at A2aMEDIA. 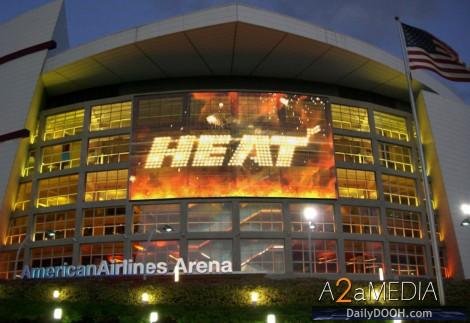 In fact, many of us will probably admit to having gone to ‘see the Christmas Lights’ in town in the past couple of weeks. The beautiful displays are a ‘must see’ of the festive season. These fairy lights could soon become pixels, and pixels allow us to place images and messages, i.e. digital signage.

Beaulieu believes that actually, well placed digital signage not only provides a great platform for brand awareness and local information, but it can also transform a space into a digital destination in it self, a tourist attraction. We have already seen this happening, with the best known cases being: Piccadilly Circus in London and Times Square in New York.

“I am seeing the concept of digital destinations take hold in peoples ideas of how digital signage can be used. As standardised signage formats become more common, differentiating designs, location specific spectaculars and content based engagements are becoming more prevalent to garner attention and impressions,” said Beaulieu and added “This is solidifying the concept of digital destinations– locations and installations that are an attraction in and of themselves rather than as a way to capture attention of visitors in a location for another reason.” 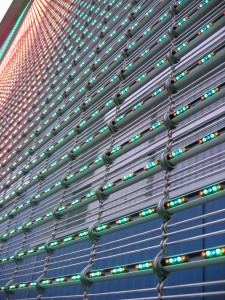 A2aMedia has an original DS proposition with its Mediamesh. Mediamesh is a transparent, architectural product that has won numerous awards for its beautiful design. Instead of an insert in the architecture, Mediamesh blends with the building. It is also eco-friendly. Based on LED technology, it allegedly uses 85% less energy than traditional LED displays.

A2A Media’s Mediamesh has already taken prime position in key locations such as the Duomo in Milan or the Miami Media Mesh. Beaulieu says his company is seeing the trend to think about the design of buildings themselves as a media experience, Vegas being  one of the leaders locations on this concept. “The proposal is not to have a TV on a stick,” emphasises Beaulie, “but rather merging with the architecture. You can take a building and turn it into a perfect surface for displaying info, so that the message doesn’t feel like an after thought.”

But of course, juts the screen in isolation will not do the trick, what you put in it, is key. “When we talked about putting content in DS, previously there where glorified play lists, but now we can offer context information. You can use content bringing social media, interaction, allows flexibility in the ways we are using displays that are no longer square. Digital Signage working in harmony with its surrounding architecture is the way forwards for this medium,” concluded Beaulie.

This entry was posted on Monday, January 10th, 2011 at 10:05 @462 and is filed under DailyDOOH Update. You can follow any responses to this entry through the RSS 2.0 feed. You can leave a response, or trackback from your own site.