Baltimore-based Millennial Media, which operates what is believed to be the largest independent mobile ad network in the U.S., has raised $27.5 million in a new round of funding. 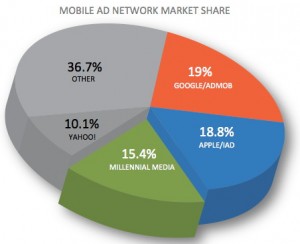 Thus increasing the company’s total backing to $65 million since its launch in 2006 – note that two of those are also recent investors in Access 360 Media, Ed

Baltimore-based Millennial plans to use the proceeds to build on its Feb., 2010 acquisition of San Francisco-based mobile analytics firm TapMetrics with additional acquisitions this year, as well as investments in its international and platform lines of business. The company, headed by Paul Palmieri, president and CEO. says that it tripled its (not announced. Ed.) revenue in 2010.

Millennial claims that its mobile ad network currently reaches more than 85% of U.S. mobile web users and serves more than 17 billion mobile ad impressions a month. In Dec./2010, IDC estimated that Millennial was the largest independent mobile ad network at 15.4% market share, compared to Apple with 18.8% share, Google/AdMob with 19% and Yahoo! with 10.1% percent share.

Interested in international growth, Millenial has built a team in London, and has begun to expand to the Asia-Pacific region.

This entry was posted on Thursday, January 6th, 2011 at 08:00 @375 and is filed under DailyDOOH Update. You can follow any responses to this entry through the RSS 2.0 feed. You can leave a response, or trackback from your own site.