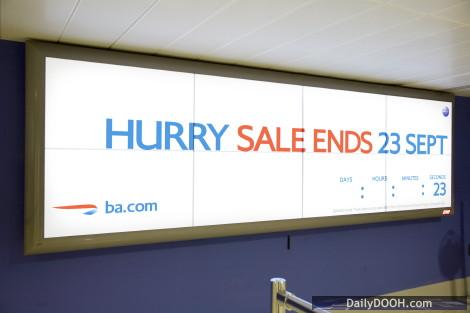 We noticed that British Airways used one of EYE’s Landscape Digital sites at Manchester Airport to count down to the conclusion of BA’s Autumn Sale.

Rachel Howe, Account Director at Kinetic told us “This short tactical burst allowed us to amplify the campaign message in the final days of the sale. It exploited the advantages of digital media technology in an area that offers all the advantages of traditional OOH media. We targeted the leisure audience in an area with a longer dwell-time and used the flexibility of digital to capture their attention.”

The digital countdown captured departing passengers as they queued to go through passport control.
British Airways’ five-day countdown began on Friday September 19 and concluded at midnight on Tuesday September 23 when the display automatically switched to the advertiser’s latest creative announcing the price of its Manchester to London fare.