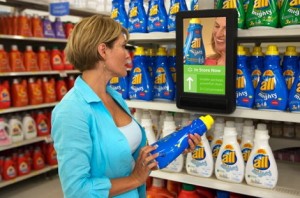 Presenting with their media and content partner, Studio Squared (which is essentially a chimera of Walmart, The Martin Agency and Media Vest) they unveiled some compelling sales lift numbers for their end-cap program.

According to marketing director and Smart Network general manager James Beck, the company’s online media program delivers 1 billion ad impressions per month to an audience of 32 million monthly unique visitors – visitors spend an average of 15 minutes on the site each visit.

Allegedly when that program is COUPLED with the Smart Network the digital media program has a monthly reach of between one-third and one-half of the U.S. population.

Not surprisingly, the sales lift numbers are pretty impressive and it’s compelling stuff BUT I’m asking myself a few questions about the relevance of these numbers when it comes to the overall Smart Network.

I don’t think it takes a rocket scientist to figure out that if you put a compelling enough commercial on a screen next to that product, you’re going to lift sales.

The question is, how is the rest of the network performing. How are the vertical screens in food and grocery lifting sales? What about screens at checkout? What about the much lauded ‘Welcome Screen‘ at the entrance (a kind of digital greeter without the drawl) How are they measuring those, other than with viewership numbers?

There are a few realities about “end-cap tv” that should be pointed out. Walmart stocks millions of products and launches hundreds of new products on the shelf every week, and if you’re lucky enough to be chosen for an end-cap program, then you’ll also find yourself with a healthy sales lift number!

The reality is you can’t of course give every product in the store an end-cap display, so how are all those other ads performing? Brands are spending money all over the Smart Network, I’d like to know what the RIO is on those other screens.

I’m glad Walmart are sharing these numbers, but right now it’s like McDonald’s touting the healthfulness of their salads when we all know it’s all about the Big Mac.

This entry was posted on Monday, January 17th, 2011 at 07:41 @362 and is filed under DailyDOOH Update. You can follow any responses to this entry through the RSS 2.0 feed. You can leave a response, or trackback from your own site.

One Response to “Walmart Smoke And Mirrors?”