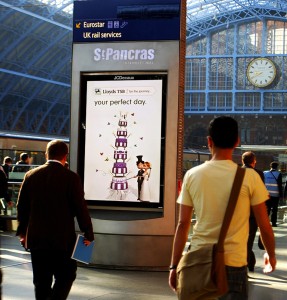 The 3 stations, which are owned and operated by HS1, are set to play a key role during the London 2012 Olympic and Paralympic Games, when high speed Javelin trains will transport thousands of spectators every hour to and from the Games. The 5 year contract was awarded following a competitive tender.

Wendy Spinks, Head of Revenue Development at HS1 said: “We are very impressed by JCDecaux. They share our vision for these 3 key stations. High Speed 1 speeds the journeys of millions of people each year and it is important that our advertising estate reflects the quality of our operations with the very latest technology.”

Jeremy Male, CEO UK & Northern Europe at JCDecaux said, “This is a unique and important rail advertising contract to have secured that will provide advertisers with an essential gateway to the London 2012 Olympics and beyond. This is also a great opportunity for brands to work with us to deliver ‘spectacular’ and digital advertising that will dominate the 3 most important rail hubs during the Olympic Games.”

This entry was posted on Thursday, January 20th, 2011 at 13:36 @608 and is filed under DailyDOOH Update. You can follow any responses to this entry through the RSS 2.0 feed. You can leave a response, or trackback from your own site.