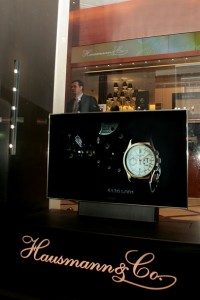 Personally we think the installers missed a trick. The opportunity with a window display and the whole point of a window display, which is to draw people in means do something amazing, something distinctive and eye catching and yet all they have done is stick a plain old 16:9 LCD in the window yet placed the MicroTiles they have in a simple horizontal line in-store.

Look closely in the back at the top of exhibit A and you can see one of these horizontal lines (6 tiles creating a display of 244.8 cm x 30.6cm). Surely there was an opportunity here to create a more distinctive shape and either place it in-store or in the window?

Whlist Benedetto Mauro, co-owner of the business, together with Francesco Hausmann, at Hausmann was incredibly pleased with the display technology, and were quoted as saying “The satisfaction with MicroTiles is total. If there was more room we would have put more units in. We are the first to use this technology in Italy.” we think they were poorly advised on what could really be done with the display technology.

The boutique was designed by Paula O ‘Neill. AV integration specialist Engineering Solutions International took care of the control systems and displays, and with Ar-thema putting its touch on the interior. The store itself is phenomenal inside, marrying as it does architecture, design and technology – placing MicroTiles into the architecture itself is definitely worth doing so don’t get us wrong – they work perfectly with the luxury surroundings.

Engineering Solutions Andrea De Martino told us “We advised Hausmann to use Christie MicroTiles for this job because this was the only way we were able to create a continuous display in a size that no flat screen displays can offer. Other requirements we had were that the display needed to be able to show images in high definition and it had to be easy to assemble as well as scalable” 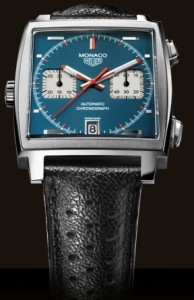 We are told that the screens are used to display product information and advertising from brands such as Cartier, Omega, Rolex, etc, but they could have been used much more effectively we think to show watches, watches and err watches.

What are wrist watches if not long and thin? How are they usually displayed physically in the retail store? (hint: see exhibit b to the left here). Squashing pictures of watches onto a television format on the LCD in the store window makes little sense. Is the strap not part of the watch? Just think of the stunning visuals you could have in your windows with several tall columns made of MicroTiles? When I look at say Tag Heuer watches as just one example I note that the cost of the watch can go up in increments of 1,000’s (or more) by the strap that it bears!

With the 12 MicroTiles they purchased they could have made four x three column high units and have been able to show watches as they should be seen and display stunning visuals to boot.

For a sizable discount on the gentlemen’s Tag Heuer Monaco shown above in exhibit b we will even come over and show you how it should be done.

This entry was posted on Monday, January 24th, 2011 at 08:58 @415 and is filed under DailyDOOH Update. You can follow any responses to this entry through the RSS 2.0 feed. You can leave a response, or trackback from your own site.