The OAA Is Now The Outdoor Media Centre

Adrian broke the news last night but I was there at the launch of the Outdoor Media Centre. It was a pleasant evening at 9 Adam Street in central London. The rectangular room with vaulted ceilings was very crowded with people from both DOOH and traditional OOH. 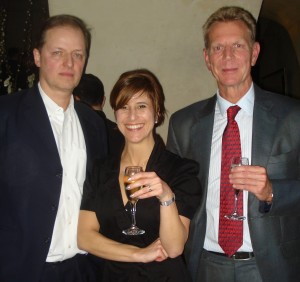 The OAA has indeed changed its name, and it’s now the Outdoor Media Centre (OMC). The OMC launched a new website and wants to better establish itself as a true platform for the industry’s dialogue.

The website has video interviews with important figures in the industry; case studies from companies that work in the outdoor media sector; news; events diary and opinion pools.

JCDecaux’s Jeremy Male, Chairman of the Outdoor Media Centre, opened the conference giving an overview of how strong the OOH industry is at the  moment. He said “OOH is showing a growth of 12.5%, only bettered by TV. Digital now represents 12% of all outdoors advertising and with the London 2012 Olympics coming up, this is only going to go up.”

“The outdoor industry is more cohesive than it’s even been,” continued Male, “and this is a good time to redefine the OAA and the role of the body as a common platform for marketing.”

Mike Baker, the OMC CEO, took the microphone next presenting the new website and explaning how the OMC can play an important role for media planning and advertising agencies.

And don’t be surprised if suddenly the new name and brand become familiar to you very quickly. The OMC has taken advertising space on trade publications, branded taxis and also in the Underground with CBS Outdoors – but not on DailyDOOH yet, Ed

NEC Displays provided four thin vesel screens for the presentation and Bose made the walls vibrate with its powerful speakers.

The event was over by 8pm, but this is the beginning of a more interactive space for the OOH industry, with the website launching a Hall Of Fame voting on the 9th of February, for the best OOH graphics and new reports and surveys.

This entry was posted on Wednesday, January 26th, 2011 at 12:05 @545 and is filed under DailyDOOH Update. You can follow any responses to this entry through the RSS 2.0 feed. You can leave a response, or trackback from your own site.

One Response to “The OAA Is Now The Outdoor Media Centre”