Are We Gonna See These At #ScreenMediaExpo? 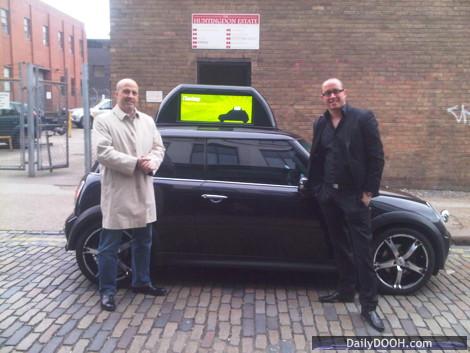 Some folks have seen them already flying around London. Perhaps this means that we are going to see them at #ScreenMediaExpo in May in London?

Whilst this is cool the guys and gals at Eyetease Media have a real job on their hands in selling this concept. Loads and loads of people have tried similar things with vinyl stickers and wraps. The problem is that the main metropolis’ are already pretty well served by black cab advertising opportunities and advertiser demand is naturally more limited in suburban areas.

The other issue is that agencies won’t have much ‘quality control’ unless Eyetease Media were ONLY to deal with large cab operators such as Addison Lee.

Our guess is that they (Eyetease Media) will be able to generate some local advertiser demand but it’s going to be a tough proposition for national sales.

This entry was posted on Thursday, January 27th, 2011 at 12:43 @571 and is filed under Scuttlebut. You can follow any responses to this entry through the RSS 2.0 feed. You can leave a response, or trackback from your own site.

One Response to “Are We Gonna See These At #ScreenMediaExpo?”