‘Has The 7-Eleven Inc. Rollout Got Funding?‘ we wrote several times last year (errr and the year before) with Harris Broadcast being the last in a long line of suppliers who might have been persuaded (somehow) to part with cash and equipment to fund the network. 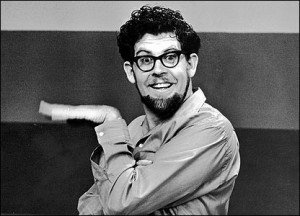 Being so sure of Harris’ involvement we wrote back in October 2010 “Expect an announcement from either side shortly” but nothing has been forthcoming and Harris, even being questioned 1:1 have stayed tight lipped.

Imagine our surprise then (not) when in a 7-Eleven yesterday in LA (Wilshire Blvd) two DDN screens were spotted in store.

The content loop consisted of 5 pieces – all of them devoted to 7-Eleven, so absolutely no outside advertising dollars!

At the end of the content loop the ‘DDN Network Logo’ appeared and just below it was none other than a ‘Powered by Harris‘ logo.

Perhaps it was referring to Rolf Harris because it is hard to believe that the clever folks at the top of Harris Broadcast would give money to the abrasive jokers at DDN or indeed associate a brand as good as Harris with a network that, as we wrote back in 2009, is going to go nowhere in its present guise.

This entry was posted on Saturday, January 29th, 2011 at 09:10 @423 and is filed under DailyDOOH Update. You can follow any responses to this entry through the RSS 2.0 feed. You can leave a response, or trackback from your own site.

One Response to “DDN 7-Eleven Powered By Harris”