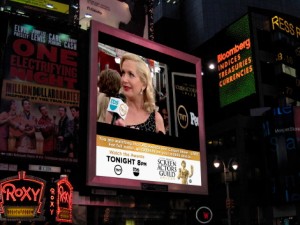 TNT, TBS and PEOPLE magazine teamed up to present the special live, pre-show webcast that put viewers in the middle of the red carpet glitz and glamour of the awards show. The pre-show included the announcement of True Blood (TV) and Incepton (film) as the winners of Screen Actors Guild Honors for Outstanding Performances by Film and Television Stunt Ensembles by SAG Awards committee chair JoBeth Williams (actress in Private Practice) and Ken Howard, SAG president. The pre-show, also streamed live on tnt.tv and tbs.comand, ran live for the first time on Clear Channel’s SpectacolorHD digital billboard, located in the heart of Times Square.

Clear Channel HDSpectacolor’s powerful out-of-home platform informs and entertains the more than 500,000 people who have access to the company’s billboard. The Times Square, with superb image quality and interactive capabilities, carries a news, sports and weather crawl in the bottom third of the space from CNN, global news source and a TNT and TBS sister network.

Set in the ‘Crossroads of the World,” the SpectacolorHD
board is situated at 47th Street and Broadway, across from Father Duffy Square and the striking TKTS Booth with its ruby-red glass staircase.

This entry was posted on Monday, January 31st, 2011 at 10:19 @471 and is filed under DailyDOOH Update. You can follow any responses to this entry through the RSS 2.0 feed. You can leave a response, or trackback from your own site.