Bob Simpson, Electrosonic’s founder, presented the ‘Displays of Tomorrow?’ talk at the Futures Trends conference  the day before the doors for this year’s #ISEUROPE open to the general public. 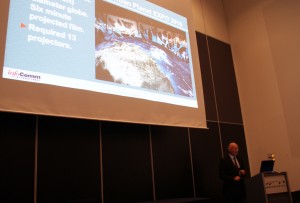 Simpson has had first hand experience of the dominant display technologies in the market. He took the audience on a journey going back to the time when the industry first started talking about flat screen displays, which was, surprisingly back in the 1950s.

Since then the industry’s holly grail has been to achieve thinner, brighter, lighter and more reliable display screens. Plasma displays lead the way when flat screen displays first broke into the market in the 1990s, but now plasma constitutes only 10% of the market, having been replaced by the more efficient LCD displays. LCDs are being improved all the time. Size, performance, environmental friendliness and resolution are year on year moving the bar on display technology to now include also 3D.

But what’s new? Well, Simpson gave a detailed description of how e-Paper technology is evolving providing new efficient ways to present information. New devices such as Amazon Kindle and others that display e-ink allow users to have books and other information in a portable reliable format that consumes very little energy.

He also mentioned plastic transistors as a technology tried but for now discarded because of its cost, but he maintains we need to watch this space.

Still on the e-paper subject Simpson introduced ‘Electrowetting.’ Electrowetting, a technology invented by a company called Liquavista, can be manufactured on LCD production lines, although you would only use the back part of the LCD panels. In fact, a clear sign that we will be seeing more of this technology, is the fact that Samsung acquired Liquavista at the end of last year.

He mentioned OLED as a growing technology, specially in the smaller displays market such as mobile devices. You can have an Organic LED display or you can also print it. OLED can also be suitable for larger displays, although this has not been seen in the market aside from trade shows such as ISE.

Simpson closed his presentation talking about projectors and whether its days were numbered. “Projectors are still the best for large format images, 3D and cinemas,” said Simpson. Projectors are getting brighter and offer better definition with 4K as its new frontier.

Finally, on the subject of projectors, Simpson mentioned using laser beams as a light source. Kodak has recently launched a high power laser projector that uses 12 lasers of each RGB colour. The lasers only need a small lens and, as the light is already polarized, it could be ideal for 3D. The polarization could even be done in the projector.

But, he said, whichever technology might prove to be the next big hit in displays, what it will need is a significant investment to make it grow.

This entry was posted on Monday, January 31st, 2011 at 19:59 @874 and is filed under DailyDOOH Update. You can follow any responses to this entry through the RSS 2.0 feed. You can leave a response, or trackback from your own site.