JCDecaux Sets Sail For The Olympics

JCDecaux has launched the Stratford Digital Sail, located on the A11 commuter route on the edge of the Olympic Park. This high-profile digital display will enable advertisers to reach audiences visiting the Games, deploying multiple creatives and time-sensitive messaging. 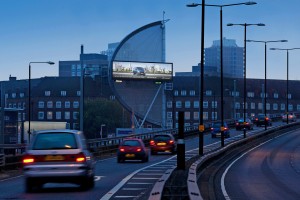 Mercedes and Channel 4 are the launch advertisers for the Stratford Digital Sail, deploying the state-of-the-art digital 96-sheet billboard to reach audiences.

Spencer Berwin, Managing Director – Sales at JCDecaux said, “The Stratford Digital Sail is on the doorstep of the Olympic Park and will give huge visibility for brands during the Games with up-to-the minute messaging and multiple creatives. The Stratford Digital Sail is a key part of JCDecaux’s digital investment and follows our recent commitment to double JCDecaux’s digital mall and rail footprint in 2011.”

The Stratford Digital Sail is at the heart of a multi-million pound infrastructure investment and development programme on the A11, the key commuter route located on the border of the Olympic Park. With an audience that is 49% 25-44, the digital screen faces the inbound traffic coming from East London into the City and Central London.

This entry was posted on Tuesday, February 8th, 2011 at 07:38 @360 and is filed under DailyDOOH Update. You can follow any responses to this entry through the RSS 2.0 feed. You can leave a response, or trackback from your own site.