Seventeen percent of the on-the-go audience make purchases while mobile, and 20% visit physical store locations after seeing a relevant ad.

And the greater the discount offered, the further the mobile audience is willing to travel to redeem a promotion.

[1]These are some of the findings revealed in San Francisco-based JiWire [2]’s latest Mobile Audience Insights Report, which examines location-based media engagement, the mobile device landscape and public Wi-Fi trends. The recent survey in Q4 2010 found that location-based ads are driving mobile shopping.

“Consumer demand for location-based services and reception to location-based advertising continues to increase dramatically, with companies like Groupon, Facebook and now even Google getting into hyperlocal deals,” says David Staas, senior vice-presideng of marketing at JiWire, the leading location-based mobile media company reaching the on-the-go audience. “Localized ads help consumers find the best deals and venues in their area and as location-based services become more mainstream, people are becoming more willing to give their location to reap the benefits of relevant promotions and discounts.”

Location-based services and apps are increasingly important to mobile users on the go. As people become more open about sharing their location with apps and services, they are realizing the benefits of providing information to receive relevant and timely ads.

According to the survey respondents:

The report also found location-based advertising is driving consumers to physical storefronts, as evidenced by the 20% of the on-the-go audience visiting a store in response to a location-based ad. While 42% of respondents are most likely to use location-based services for finding store locations, as the discount in the ad increases, the more time a customer is willing to travel to redeem the offer. This provides new opportunities for brands to attract new customers across a broader distance and drive in-store traffic and sales, says JiWire management. 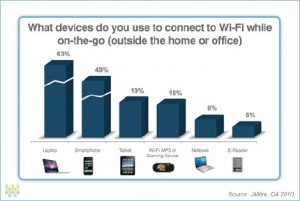 [3]The introduction of the iPad in 2010 has not only taken marketshare away from other top mobile devices, including the iPhone and iPod Touch, but is also starting to become the primary device for people on the go. From Q2 to Q4, laptops decreased 26% as the primary device used to connect to public Wi-Fi, while the iPad, along with other tablets, increased 10%and gaming devices (including the iPod Touch) grew 7%.

The top Android devices in the U.S. have become the LG Optimus and the HTC Evo, both running on the Sprint 4G network, while the Droid Incredible and Desire have taken the No. 8 and No. 10 spots respectively. Android continues to increase in marketshare, with 7.7% of ad requests. While Apple iOS still has a strong hold as the top operating system, its share of the mobile device market dropped below 90% for the first time. In comparison, the Apple iOS in the U.K. maintains 83.7% of marketshare, with Android accounting for 12.3%.

While the U.S. has continuously been the top market for Wi-Fi usage, China has exceeded the U.S. for the first time, with a 157.7% increase since Q3. The number of public Wi-Fi locations worldwide considerably increased over 2010, growing to more than 414,000 hotspots, a 43.1% increase from last year. Additionally, from Q3 to Q4, there was the most growth in locations during the year, increasing 22.7%.

JiWire’s Mobile Audience Insights Report is based on data from approximately 450,000 public Wi-Fi locations, as well as a survey of more than 3,000 customers randomly selected across JiWire’s public Wi-Fi Media Channel between Oct. and Dec., 2010. JiWire serves advertisements to 40 million unique users across location-based apps and public Wi-Fi locations in North America and the United Kingdom and records data from every ad request.