Mitsubishi Electric’s Diamond Vision OLED  screen was voted the Most Innovative Commercial Display at the InAVate Awards held at ISE 2011. DailyDOOH’s editor in chief Adrian Cotterill, handed the award at the InAVation awards in Amsterdam on February 2nd. 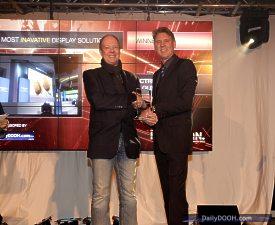 Mitsubishi Electric’s Diamond Vision OLED screen has generated a huge amount of interest since being launched commercially last year. Based on a unique technology developed by Mitsubishi, the Diamond Vision OLED screen is the world’s only scalable large format OLED display, capable of creating stunning indoor screens of virtually any size or shape.

At ISE 2011, the company demonstrated a 155” display in a conventional flat screen format, and an eye-catching 2m diameter circular screen suspended above its stand.

The InAVation award for the Most Innovative Commercial Display was voted for by industry professionals in an online poll. Diamond Vision OLED scored a clear victory, with 40% of the total vote.

Commenting on the prestigious award, Peter van Dijk, Business Manager for Mitsubishi Electric Europe, said “We are thrilled that Diamond Vision OLED has been recognised by the industry. The team from the Diamond Vision factory in Japan, who developed the ground-breaking OLED technology behind the screen, were absolutely delighted with their project’s success.”

Mitsubishi’s unique OLED screen is comprised of fixed resolution OLED tiles which can be assembled seamlessly together to create displays of virtually any size and shape. Compared to conventional LED displays, the OLED tiles are extremely thin and lightweight. At roughly three times the brightness of an average LCD screen, OLED displays are very well suited to indoor screen applications in high ambient light conditions. Its 3mm pixel pitch enables extremely close viewing distances with virtually no off-axis colour distortion, and at roughly half the cost of an equivalent specification LED screen, it is a practical proposition for more public display applications than every before.