EYE, New York-based mall media specialist, was recently chosen for the Above the Influence campaign [1] which used teen-created artwork inspired by the overall brand message. 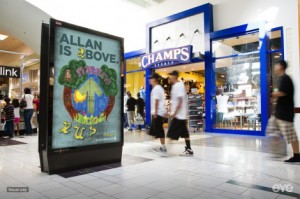 [2]The Above the Influence campaign goal is to raise awareness and provide information to young people about the dangers of drug use, and to strengthen efforts to prevent drug use in their local communities.

The four-month campaign, running on EYE malls across America within Above the Influence’s priority markets, targets teenagers in the 14-to-16 age group and is part of a larger effort to target teens in high-traffic areas within their local communities.

The teen artwork submissions have also been used for other national and regional Above the Influence advertising initiatives, from teen-targeted TV networks and websites to posters in local community centers and high school gyms.

Zach Bruning, media planner at Draftfcb [3], says, “With the need for increased emphasis on delivering the Above the Influence message to local communities, EYE was an obvious choice for the campaign, as it had coverage of over 90% of our target markets. Malls provide a great opportunity to reach teens in a social environment in a place where they spend a fair amount of their spare time.”