Wisconsin Institutes for Discovery, a series of buildings at the University of Wisconsin, wanted something to attract the attention of the public and donors when a new building opened. 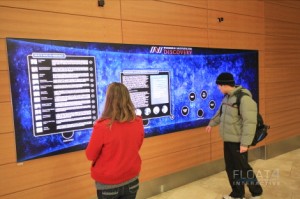 The result is on the first floor of the state-of-the-art facilities that brings together scientists and researchers from many disciplines: Two totally different long screens form an interactive zone that attracts both employees of the research centre and the general public. 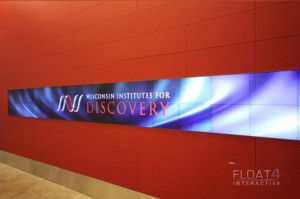 “The entrance display is playful including photos of the eyes of various researchers who work there, creating a relationship with people working in the building,” says Alexandre Simionescu, managing partner, Float 4. “And the 10’ x 4’ wall, which has various information to be called up interactively, also has an area for donors. The same wall allows for plug-in so it can be used for presentations.”

This entry was posted on Thursday, February 17th, 2011 at 10:05 @462 and is filed under Scuttlebut. You can follow any responses to this entry through the RSS 2.0 feed. You can leave a response, or trackback from your own site.