“There was a very clear demand in the digital signage market for a media playback engine that bridged the need for performance and reliability with the realities of tight capital budgets,” says Doug Wismer, vice-president sales and marketing, TTUFF Technologies. “This AMD-based system has the computing and graphics processing power needed to meet the most demanding requirements of digital signage networks.” 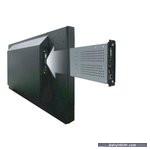 The TTUFF brand reflects the company’s long-running focus on developing products tuned to the real world demands of digital signage networks. Built to run uninterrupted for years in demanding environments, thousands of TTUFF drive systems are being used in airports, universities, amusement parks, arenas, restaurants and mass merchandise retail stores around the world.

“You can put consumer-grade PCs into these kinds of environments and they’ll do the job, for a month or two,” says Wismer. “But an off-the-shelf PC will not survive, running unattended, 24/7. The XPE is engineered specifically for that task.”

TTUFF will be demonstrating the new XPE Blades at next week’s Digital Signage Expo trade show and conference in Las Vegas, Feb. 23-24, at Booth 1026.

This entry was posted on Friday, February 18th, 2011 at 10:01 @459 and is filed under Scuttlebut. You can follow any responses to this entry through the RSS 2.0 feed. You can leave a response, or trackback from your own site.