Ford is launching an augmented reality campaign featuring the new 7 seat Grand C-MAX car on JCDecaux Innovate’s mall six-sheet screens in the UK. The campaign allows people to handle and explore miniaturised 3D ‘virtual’ models of the cars on screen and in the palm of their hand. 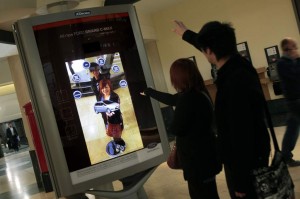 The campaign, created by Ogilvy & Mather in London and digital production company Grand Visual, allows users to interact with the car simply by holding their hands up to the screen.

Virtual buttons allow the user to choose the colour of the car, open doors, fold the seats flat, turn the car 360 degrees and select demos of the car’s key features such as Active Park Assist.

According to Ogilvy, this is the first outdoor augmented reality campaign to use 3D depth imaging technology in the UK. Rather than using a printed marker or symbol as a point of reference for interaction, the user interface is based on natural movement and hand gestures allowing any passerby to immediately start interacting with the screen content. A Panasonic D-Imager camera accurately measures the users real-time spatial depth output and Inition’s augmented reality software merges this real life footage with the 3D photo-real Grand C-MAX on screen.

Mark Simpson at Ford said: “Using live interactive outdoor campaigns is a great way to really engage with the audience in a way that is not possible with static posters. This has enabled us to create a targeted and tactical campaign that is relevant and fun to use.”

Andy Dibb, Associate Creative Partner at Ogilvy & Mather commented “It’s eye catching, intrusive, groundbreaking and brings to life the idea of ‘Innovation in your hands’.  And it’s a great way to get hold of a new C-MAX”.

Dan Dawson, Digital Director at Grand Visual added: “Digital outdoor enables advertisers to get closer to consumers. Ford’s clever use of the latest technology is a great fit for the next-generation C-MAX cars. Customers can get a real feel for the cars before stepping foot in a showroom”.

Spencer Berwin, Managing Director – Sales at JCDecaux said, “This is the very latest in ‘Augmented Reality’ technology and enables consumers to put the brand in their hand. This campaign for Ford gives consumers the power to control the creative without even having to touch the screen – this is a real media first”

Laura-Jane Powell, Kinetic OOH commented: “This is part of a much wider campaign supporting the C-MAX, and Augmented Reality in malls was chosen specifically to enhance the consumers brand experience and engagement.  This media first is a great example of collaboration between companies and Outdoor at its pinnacle.”

The campaign was planned and booked by Mindshare and Kinetic and will run for two weeks at Bluewater, Greenhithe; Bullring, Birmingham; Metrocentre, Gateshead; St David’s, Cardiff; Princess, East Kilbride and in Westfield, Derby.  This highly innovative campaign from Ford follows on from their SMAX ‘Ice Climber’ activity last year which also eschewed traditional billboards in favour of more immersive technologies which allow consumers to interact more intimately with the brand.

This entry was posted on Wednesday, February 23rd, 2011 at 06:04 @294 and is filed under DailyDOOH Update. You can follow any responses to this entry through the RSS 2.0 feed. You can leave a response, or trackback from your own site.