Harris announced at #dse2011 their 7-Eleven deal with DDN but it was obvious the rumours that we had reported for the past few months were true during pre-build with all the 7-Eleven content front and centre on their stand. 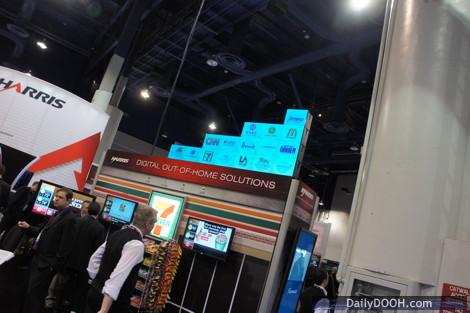 Note also their use of MicroTiles at the top of the display in a _7X4_7T_2H5T_4H3T_6HT_ configuration.

Harris also had a lot of Harrods content on their stand so perhaps there is some other announcement forthcoming soon as well?

This entry was posted on Friday, February 25th, 2011 at 17:20 @763 and is filed under Scuttlebut. You can follow any responses to this entry through the RSS 2.0 feed. You can leave a response, or trackback from your own site.