The numbers are in: the final attendance numbers have been vetted and it is now official: Digital Signage Expo 2011 [1] hosted a record 3,614 attendees, a 6% increase over 2010. 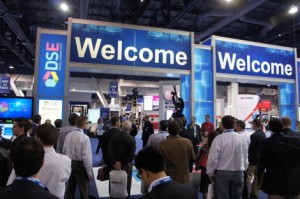 Actually, we’re not surprised at the figures after learning on day one that DSE had, at the close of its first day, already set four new records with the most exhibitors ever; the largest square footage in the exhibit’s history (60,260 sq. ft); highest conferece registration; and largest educational conference in the show’s history.

Now we’ve learned that DSE, which promotes itself as the world’s largest international tradeshow and conference dedicated to digital signage, interactive technology and digital out-of-home networks, was a success in every way, not only in increased attendance, but also with its record 195 exhibitors, a 14% increase over 2010. Further, 57 of them were first-time exhibitors, validating DSE’s preeminent position as the industry’s main show.

Exhibitors reported that attendees were high quality decision-makers from a broad variety of end-user business categories, as has been the case since DSE’s launch in 2004.

The fact that many reported doing business at the show resulted in an unprecedented onsite renewal of booth space for 2012 – over 70% of the 2011 floor already committed.

Chris Gibbs, president of ExpoNation LLC, which produces DSE, says, “DSE has always placed a strong emphasis on education as the most effective catalyst for industry growth. 2011 saw an aggressive expansion of our educational offerings and the industry responded with the largest growth in conference registration in our history – up 37.5%!”