In the midst of flashy Times Square with its numerous digital out-of-home boards, Hankook Tire America Corp., Wayne, New Jersey, has re-launched its popular tire-shaped billboard in a new marketing initiative that will make it a visual staple right in the center of America’s most famous intersection for at least one full year. 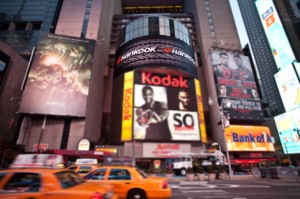 The billboard, a 31’ x 98’ image that replicates the tread of Hankook Tire’s ultra-high performance Ventus V12 evo tire, will remain on the façade of the Marriott Marquis hotel in prominent display for a full year.

Hankook’s decision to return to Times Square stems from a similar tire billboard erected in the same location in 2010. The outstanding positive feedback that Hankook received from last year’s Times Square billboard made this year’s signage a solid decision. Hankook’s 2010 billboard was praised for its creative design and unique application as a tire protruding from the front of the building.

“As one of the fastest growing tire companies in the world, the time has come for Hankook to be in locations like Times Square and alongside other well-known, established brands,” said Soo Il Lee, president of Hankook Tire America Corp. “With more than 1.5 million consumers passing through Times Square every day, we are placing Hankook on one of the largest advertising stages in the world.”

In addition to billboards, print and broadcast advertising, Hankook’s marketing efforts include engaging consumer promotions, such as baseball-themed rebate programs giving consumers the chance to win a new car in addition to a rebate. The goals are to penetrate major metropolitan areas in an effort to raise consumer awareness, increase market presence and foster brand recognition.

This entry was posted on Thursday, March 17th, 2011 at 09:59 @457 and is filed under DailyDOOH Update. You can follow any responses to this entry through the RSS 2.0 feed. You can leave a response, or trackback from your own site.