Amscreen, good eggs that they are, are once again supporting this week’s Comic Relief [1] effort. It’s ‘red nose day’ this Friday for those readers NOT in the UK and not in the know and Amscreen [2] have made a huge donation by giving free airtime. 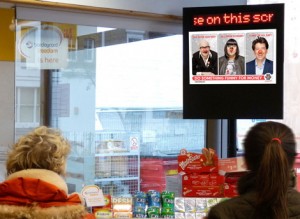 Ah so that’s why your bird thing looks like someone has thumped him on the beak!