ADAPT Media has made a fast leap to national digital billboards overnight, signing, with the help of Peter Irwin, former president/CEO of The Outdoor Broadcast Network, the majority of the former OBN affiliate network across Canada, and adding many new boards. 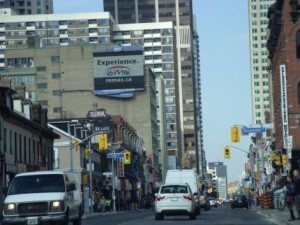 The new ADAPT Digital Billboard Network will include many of the highly sought-after high traffic locations once offered by OBN such as 696 Yonge just South of Bloor; Canada Place, Vancouver; Rexall Arena, Edmonton; and McMahon Stadium, Calgary.

One of the premium new locations signed with Maple Leaf Sports and Entertainment is the Ricoh Coliseum on the Gardiner Hwy, which Adapt will exclusively sell as part of its National Network. This includes the full motion digital propert as well tri-boards andstatic ads on the East and West sides of the building.

ADAPT has signed agreements for 30 digital billboards and will continue to grow its inventory in strategic locations throughout the country.

This offers a new opportunity for buyers that felt lost at losing the national coverage OBN offered. (OBN had closed its affiliate network in July, 2010, citing a combination of an advertising downturn and a reluctance by its major investors to put funds into upgrading the infrastructure. It put its affiliate network up for sale back in. keeping only its screens in the high traffic Dundas Square region in Toronto. See our July, 2010 article. Ed.)

“Part of the new agreements that we are signing is to have the signs upgraded,” says Jamie Thompson, president of ADAPT. “For example, 696 Yonge street has new bulbs and is looking amazing now.

“ADAPT will have the largest full motion digital billboard network in Canada. It offers clients the opportunity to execute campaigns in a more dynamic fashion: a 15-second spot can quickly catch the eye of a passer-by for a more engaging and memorable advertisement”.

“My past experience setting up and selling Newad’s national indoor digital network makes this a great fit for ADAPT,” says Amelio. “And having the experience and training from Dora Alexander, former OBN sales manger, will help give ADAPT’s sales team the edge they need to understand the digital billboard landscape”.

ADAPT is a national OOH provider of static street-level furniture, and as well, represents many new media innovations. It has been in business since 1998.

This entry was posted on Tuesday, March 22nd, 2011 at 17:27 @768 and is filed under DailyDOOH Update, Scuttlebut. You can follow any responses to this entry through the RSS 2.0 feed. You can leave a response, or trackback from your own site.