If someone asked me to build them a digital signage software solution today, this new player would be the engine behind it.

It’s packed with all the tasty bits of goodness that rich media platforms should have, killer features such as built in 3-D transformation- which translates into; you don’t need to have / or be a 3D Animation god to create cool stuff, – you can design in 2D, then animate in 3D – now with local audio processing as well, Ed

This new version supports “roll-your-own” filter and effects [1] features based on the same technology used in AfterEffects, has an enhanced text layout engine, a dynamic sound API and the cherry on top of this whole thing is that Adobe’s integrated its authoring environment into the CS4 [2] digital workflow.

Adobe’s new flash player brings with it the legacy of the OpenScreen Project [3], an open source community to create platforms for rich media to be delivered not just to DOOH applications, but also to mobile, web and consumer electronics.

Which of course. is the holy grail for scalability in the digital out of home ecosystem. I forsee two trends developing, a migration from proprietary software to the more open platforms, – The more advanced DOOH networks that have already spent their cash on building out their player hardware infrastructure will discover that there is a clear cost savings substituting flash as a player and distribution engine vs. paying a monthly or annual software subscription fees for the proprietary platforms. Consider Clear Channel’s Digital Billboard in Times Square NYC, its running on an adobe flash player. 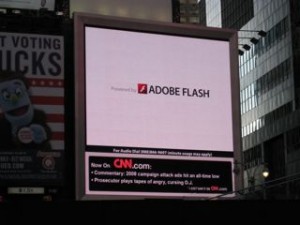 The second trend is that its only a matter of time until on-line video networks such as Hulu [5] or Joost [6] figure out how easy and cost effective it can be to expand their online networks into the DOOH space.

8 Comments To "Adobe Flash Player 10, The Importance Of…"

It´s just a pitty Adobe will not allow us to use Flash 10 with Digital Signage (legally we can only use Flash7). (EULA, restrictions, 3.1).

that’s correct. – but there’s always a way to get around that stuff… that’s why you need to join up with the OpenScreen Project. (openscreen.org)

But please recognize, Flash has its problems… 1) it does not have the ability to sync playback with vertical retrace on displays, resulting image tearing during playback, and 2) it’s really easy (even more so now with all the new whizzy features) to create content that plays poorly on normal playback PCs. Worse yet, there’s no way to predict how it will play. Hence, I’d say it’s unsuitable for most signage applications – which should strive to be “broadcast quality”. –Lou

that is a good point Lou, but- I’m still optimistic that these tech issues can get optimized easily, given the amount of work that adobe engineers did for the Clear Channel folks – basically they created a special HD codec to help optimize playback on their sign system in Times Square (for free + some publicity- I might add)

I agree with Lou that Flash will never compete with high quality video content, but in many cases it is a comprises between quality and budget especially where regular updates are required to keep content fresh.

Sorry Manolo, but the three commentators stole the words from my mouth. I’ve already spoken to adobe reps about using Flash 9 for several development companies (some of the times post the OpenScreen genesis) and the licensing fees aren’t that “open” and, unlike what your suggestion implies, I really don’t think Openscreen is as open as they make it seem.

The biggest issue I believe is as Lou put said, Flash’s performance is very poor. The technology was made for website-sized animations. Digital signage-sized animations on screens that are normally with a resolution of 1360×768 and above, are incredibly CPU intensive. One of software partners has asked Adobe about this and they replied that the performance issue would not be resolved. So what that Flash can now do some things that After Effects can? Just use AE, it does them better and provides a nice video that will play perfectly.

I will not lie, we use Flash a whole lot–most of our clients use signage for info distribution and we do all the dynamic templates and feeds with Flash, that’s what its good for.

All the above are correct and imprtant (but very technical). Interesting though where this takes the technology:
i.e. Flash does not currently support any scheduling (or more advanced features) important to digital signage. Therefore, this must be built by a third party, under the open source agreements (openscreen.org). But… how would a company make any money from doing this (other of course than sales of Adobe Flash player)? Thus, although initially there may be a swathe of developers eager to create new apps (like what has happened with the I-phone 3G), the finanical models won’t stack up, and we will get a number of users who invest in a platform with no support.

I beleive that Flash is a great medium for Digital signage – not as good as playback of video (both visually and technically), but it has it’s place, and it does what it does very well (animate flat images and create exciting interactive content). But it should keep doing what it does well, and not try and creep into the other industries.

Jim – these very good comments, and though I may sound like an adobe flash “fanboy” but really- I’m not.

My experiences with Adobe have been very different from yours, I found that depending on the size of the opportunity and if its a high profile project, I’ve never had any problems getting what we need (including license terms & engineering help) to get things done. The reality of the situation, it really depends on how high up the food chain the relationship is with Adobe.

I agree, Flash animation performance is not YET optimized for full res 1360 x 768, and is cpu intensive, but it can and will get better. A good example of how this will happen can be found on the streaming video site (hulu.com) Adobe created a codec/H.264 to provide HD quality (full screen too!) for their flash distribution channel. This was prompted by the demand that advertisers wouldn’t adopt the platform if they didn’t make it better. The demand from casual gaming and app developer for flash with better quality and less cpu intensive (less battery drain) on several mobile platforms will push the development a more optimized version of flash sooner than later.

to your point about using flash instead of AE? that’s true, why not use AE? Its good and can be done in the studio. – however, more advanced studios want to leverage a more dynamic way of creating effects vs. pre-producing them as it gives them more flexibility on the user experiences. (like with games and interactivity)

For sure, everyone agrees that flash is good for the standard dynamic feed templates that have become mainstream in our industry, however – in an industry fueled by tech innovation and creating things that “stand out” – I still feel strongly that its just a matter of time when Flash gets upgraded and changes our opinions.