The Buzz In Wimbledon 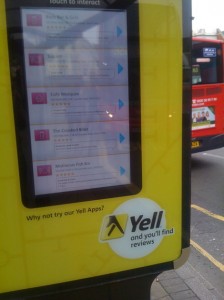 What is it with Wimbledon at the moment? No sooner do we receive from local residents pictures of new screens popping up all over the place word also reached us today of a press launch at the new Superdrug Wimbledon store.

We understand from local sources that the new store format includes screens as part of the window display. Music is most likely to be provided by Imagesound.

One of the first pictures we were sent was this Yell.co.uk campaign / display built into a bus-stop opposite Wimbledon train station. It shows local business listings as often found on their website.

We were told “You can touch the screen to bring up more info, but it doesn’t really have any more info to bring up. Maybe that is coming soon. It only appeared last week”. 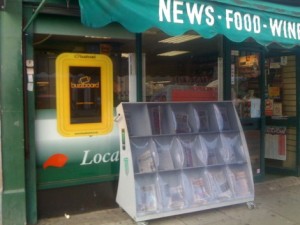 We have heard reports of these Buzzboard screens from as far away as Wandsworth so it may well be some form of London implementation. The one shown hete is on Wimbledon High Street in the window of a post office.

We were told “I know some people who have put adverts on them to sell things but I haven’t tried it myself yet. It’s a bit like the old postcard ads, but with some weather and videos too”.

We love ‘citizen journalism’ so if you have pictures of screens in your area do send ’em in. It does sound like it’s all happening in Wimbledon at the moment 😉

This entry was posted on Thursday, March 24th, 2011 at 09:43 @446 and is filed under Scuttlebut. You can follow any responses to this entry through the RSS 2.0 feed. You can leave a response, or trackback from your own site.