At the end of March we wrote in the post ‘Scala Wallahs Do India‘ “Scala it appears now has 25 full-time employees in India … courtesy of (a rather quiet) acquisition of .. Digifour Technologies” and they have alas continued to keep very quiet about the acquisition, their future plans and what they have been up to in the country. 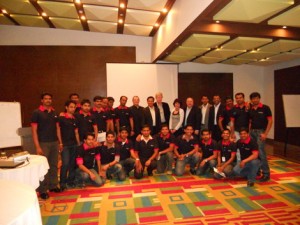 In our discussions these past few weeks with various people about helping us with India (and China) coverage (you may have noticed our email text tag line ‘advert’ recently) we have actually discovered just how successful Scala seem to be doing in India.

One way to succeed in India is to offer a total solution and with the size of the Scala division there (and the experience of the folks) it seems that this is exactly what Scala have been doing and plan to do more of going forward. Scala we are told by locals is already offering project management, content creation, content management, network management and even hosting.

Some of the new and existing Scala business we have been hearing about from locals include: –

For those wishing to charge top-dollar, India is of course a country where it is very difficult to do business. For a long time Australian based Ryarc Media Systems seemed to be doing a roaring trade there (we hear little from them anywhere globally these days) but all the time the competition was from cheap and mass produced home grown software and services.

As much as it pains us to write; Scala seem to be bucking the trend.

This entry was posted on Wednesday, April 20th, 2011 at 08:05 @378 and is filed under DailyDOOH Update. You can follow any responses to this entry through the RSS 2.0 feed. You can leave a response, or trackback from your own site.