If you haven’t had the opportunity to help Japan yet, this could be your chance! At the end of May, five employees from Sharp Electronics in the UK will set out to cycle the exact route of the epic Giro d’Italia, raising funds for the hundreds of thousands of people affected by the tsunami in Japan. The three-week-long Giro is one of cycling’s most romantic but grueling challenges, and covering 3,498km from Turin down to Sicily and back up to Milan, the 2011 edition is universally agreed to be amongst the toughest ever. 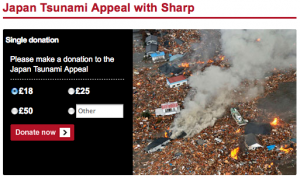 The Sharp team will be part of the larger Gran Corsa d’Italia event, conceived by Sharp UK managing director and veteran fundraiser, Paul Molyneux. Overall 60 riders are taking part in the Gran Corsa, raising money for Sharp UK’s official charity partner, The Prostate Cancer Charity, to fight the most common cancer in men in the UK.

However, in light of the recent devastating events in Japan and the company’s roots in the country, the team of five employees from Sharp Electronics in the UK felt compelled to raise additional funds for the Red Cross Japan tsunami appeal.

Paul Molyneux commented, “The scale of the disaster in Japan has really shocked us, particularly as many at Sharp work closely with Japanese colleagues.  Sponsoring the five Sharp riders provides a focus for any suppliers, partners and stakeholders, as well as staff within the company, who want to do something for those most affected by the disaster. Obviously as a highly developed nation, Japan has the capacity to rebuild infrastructure without financial help from outside, but on a human scale, there are thousands of people who need every help they can get to overcome the devastating physical and mental toll taken by the tsunami. We’re under no illusion that the difficulties we will tackle over three weeks on the bike pale into insignificance compared to what those people are facing as they look to rebuild shattered lives, but we do believe we can make a difference.”

This entry was posted on Monday, April 4th, 2011 at 09:02 @418 and is filed under DailyDOOH Update. You can follow any responses to this entry through the RSS 2.0 feed. You can leave a response, or trackback from your own site.

One Response to “Sharp Employees’ Charity Ride For Japan”