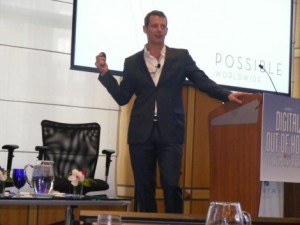 Stating that he believes 2012 will be the Year of Interactive, Kaufman said that before the redesign, only 14% of Target’s customers were buying games in-store because the games were stacked on shelves behind glass, and unless you knew how a game worked, people were reluctant to buy.

The aim was to make the video games section less forbidding by giving better sight lines for the consumers, showcasing the games, and educating consumers through letting them to browse a catelogue and seeing how the games work via the kiosks’ interactive screens.

“We wanted to make them accessible, even for people in wheelchairs, so it was essential to use a vertical screen,” Kaufan said. “We used relevant information higher up, with key information lower and keys at the bottom. And to give clues that it was interactive, the screen was slanted on an angle with silhouettes to show that it could be touched.”

The newly designed sections and kiosks are now in all Target stores, showing greatly improved sales.

This entry was posted on Monday, April 18th, 2011 at 09:58 @457 and is filed under DailyDOOH Update. You can follow any responses to this entry through the RSS 2.0 feed. You can leave a response, or trackback from your own site.