Freggo ice-cream, wanted to take its customer’s experience of its frozen delights beyond the sense of taste and smell and actually allow them to visualise flavours. Working with OgilvyOne London [1], Freggo unveiled its latest campaign at the Menier art Gallery in London. The campaign, called ‘Taste,’ uses ‘data visualisation’ technology as part of the Sensational Ice Cream campaign for Freggo 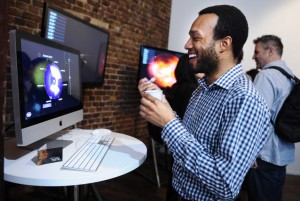 [2]OgilvyOne creative team, Rae Stones and Fiona Sanday, have been working with Andrew Shoben from Greyworld, an art collective renowned for its work in urban spaces, to create a bespoke computer program that captures six core elements of the ice cream flavour, all of which have been validated by the British Society of Flavourists.

The response data (sweetness, richness, creaminess, juiciness and so on) are fed into the program to define how the visuals look.

Visitors to the exhibition can not only view Greyworld’s visualisations of various Freggo flavours, but also create their own, bespoke ‘artworks’ by feeding their own perceptions into a computer .

OgilvyOne London’s chief executive Annette King said: “Freggo is one of those accounts we love having – it offers the opportunity to really stretch our creative muscles. We thought that a new and unique product deserved marketing that was a break from the norm. Enjoying ice-cream is a sensual, almost immersive experience – which is also different for every single person. So why not have advertising which is itself immersive and tailored to the individual’s personal perceptions?

“In collaboration with Greyworld, our creative team, led by joint ECDs Charlie Wilson and Emma de la Fosse, has come up with what we think is a high-impact campaign which will get the brand talked about and which will delight the target audience.”

Charlie and Emma added: “We buy ice-cream based on what it tastes like, or what we think it will taste like. Given that Freggo’s flavours are unusual and distinctive, we wanted to show people what their taste buds experience when trying them for the first time. It’s never been done before so, we developed a taste test with the Gaucho Head of Wine and asked the Society of Flavourists to validate it. The result is six simple questions which you answer based on how you taste each flavour. Your own personalised art is then generated. As no two people taste things in the same way, each piece of art is unique to the individual.”

The public are invited to view Taste at the Menier Gallery, London Bridge (www.meniergallery.co.uk [3]) until 16th April.