Stortinget Metro Station, situated right next to the Parliament of Norway and a short walk from the King’s Palace and some of Oslo’s most upscale retailers, is an obvious choice for a DOOH network and so it is now that Esprit Digital, often seen as the pioneers of digital poster technology for outdoor advertising have just installed 92 x 32” synchronised DEPs in the Oslo Metro. 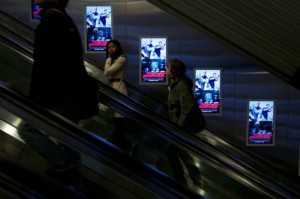 Øyvind Markussen, Managing Director of JCDecaux Norway told us “It’s not every day a new outdoor product comes to the country. We are very proud to launch Digital escalators Panels, DEPs, in Parliament subway station. We have received a very good response from the market on our investment and it will be particularly exciting to see more tactical use of outdoor advertising. The new creative ways this medium can be exploited are very interesting. Clients have the opportunity to hone the message of the campaign, not to mention take their message one step further than the static posters. Here Relevance is the key to good communication. We believe that advertisers on the DEP will be a mix of local and national advertisers.”

Peter Livesey, Managing Director of Esprit Digital, was clearly excited by the first deployment of Esprit’s DEP’s outside of the UK and rang us to say “This award-winning format has been a commercial success in London with 20 stations on the Underground and at Heathrow Airport, generating extraordinary income multiples over traditional paper formats. We went live for the first time in Scandinavia on the 1st May with launch advertising from 5 brands including Nike and Universal Films and it looked amazing. We’re really pleased with the result and delighted to be working with Øyvind and his team. I’m also encouraged by the discussions already underway in several other European cities”.

Esprit Digital will as usual be at #ScreenMediaExpo and have some really interesting time-lapse stuff to show. They are on stand C35.

This entry was posted on Friday, May 6th, 2011 at 10:39 @486 and is filed under DailyDOOH Update. You can follow any responses to this entry through the RSS 2.0 feed. You can leave a response, or trackback from your own site.