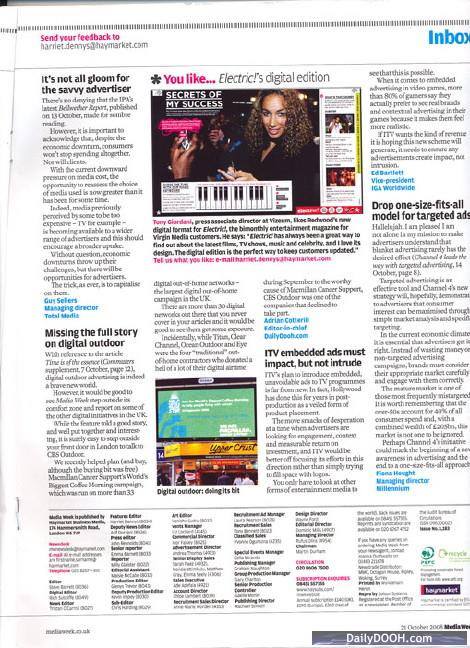 Fair play to Media Week who yesterday published the letter we sent to them last week – unless you have super dooper eye sight you won’t be able to read the scan above, so here is a transcript below…

Dear Kim, Digital outdoor advertising is INDEED a brave new world but it would be good to see you folks at Media Week step outside your comfort zone and report on some of the other digital initiatives in the UK.

Whilst this is a good story, well put together and interesting it is surely easy to step outside your front door, onto the underground and then round the corner to Camden to talk with CBS Outdoor.

There are 30+ digital networks out there that you never ever cover in your articles.

By the way. whilst Titan, Clear Channel, Ocean Outdoor and EYE were the four ‘traditional’ out of home contractors who donated a hell of a lot of their digital air time during September for this worthy cause. CBS Outdoor were one of those who declined to take part.

The letter and the criticism actually makes a little more sense when put in context, which we also wrote about here last week in our post ‘Media Week – Time Is Of The Essence‘

This entry was posted on Wednesday, October 22nd, 2008 at 16:41 @736 and is filed under Scuttlebut. You can follow any responses to this entry through the RSS 2.0 feed. You can leave a response, or trackback from your own site.