NanoLumens has just installed a display at the NASCAR Media Television Studios in Charlotte, North Carolina where Showtime’s Inside NASCAR as well as various commercials and sport promotions are produced. 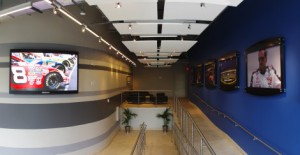 This building is next door to the NASCAR Hall Of Fame museum on which DailyDOOH has run some previous articles on, eg., the huge Christie Microtiles display wall – and also not far from the famed Charlotte Motor Speedway.

The curved wall in the picture is the entrance to the studio where various drivers, owners and pit crew pass through on a daily basis. The product is NanoLumens’ 6mm flexible LED formed to fit the demands of the surface.

The entire wall load was less than 50kg including the mounting bracket material. Screen size is 8′ x 4.5′ with brightness at 1,000 nits, average power 600 watts.

This entry was posted on Friday, May 20th, 2011 at 10:00 @458 and is filed under Scuttlebut. You can follow any responses to this entry through the RSS 2.0 feed. You can leave a response, or trackback from your own site.