Day One at Screen Media Expo had tremendous foot traffic and we didn’t see anyone looking gloomy from lack of prospects at their booths. 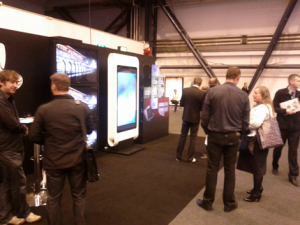 Having attended last year’s show, I guess the one thing that I’m personally missing are the group of small booths from emerging companies that often have new and neat technology to show (and want to attract potential funds). However, I’m told that that’s the result of the current UK economy and that many young companies have just not survived.

Be that as it may, the stands that I have seen have been attractive and well attended. Wandering around as well as chatting at our DailyDOOH Blogger Lounge, we’ve picked up a few bits of news, many of which we’ll write about in the next few days. For example, we learned that iSign Media [2], currently Toronto and Vancouver, will be opening an office in Tampa, Florida, around the end of June to help grow its American business.

And Activision.TV [3] of Naples, Florida, having settled with the Minkus case and obtained the disputed license, is now planning to move into the European market.

We saw some new products, such as Beaverton, Oregon-based Planar [4]’s new Bezel Touch Screen that has an all glass surface, lovely for high-end retail applications, among others. Launched in the US a month ago, it’s making its first European appearance here.

So far, the most impressive new product I’ve seen was on the Pixel Inspiration [5] stand – a new digital shelf edge solution from IMPULS TV GmbH [6] (which we’ll be talking about in more detail later).

MediaZest [7]’s virtual mannequin is getting all sorts of attention at the entrance to the DOOH Business Lounge, as is the incredibly impressive Buzzwall by Arsenal Media [8], Montreal, at the Earl’s Court Two hall entrance. Both demonstrate a warm welcome to attendants.