Apple Store 2.0 Ought To Make A Splash

A few days before engadget, Gizmodo and many of the other web sites dedicated to covering anything iPad, iPhone, App or Apple revealed (what they seem to have termed) Apple Store 2.0 (interactive iPad signage, new sound/display systems, new app and miscellaneous other updates) Ayuda had already launched and were demonstrating at #ScreenMediaExpo one of the coolest things we saw at the show which was their free Splash player† running on iPad, iPhone (i..e Apple’s iOS) and if that wasn’t enough running also on a whole myriad of Google Android devices as well. 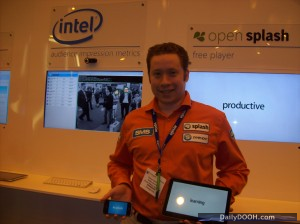 As one excited industry consultant said (no it wasn’t the Padre) “Seeing Splash running on iPhones and iPads and even Google Phones, blimey that’s cool stuff that really makes you think about the future!”

He’s correct of course it should make people think (as to should Apple’s announcement – well described by Dave Haynes in his post ‘Apple’s use of iPads for merchandising displays big moment for digital signage sector‘ here).

Who knows for example if manufacturers like NEC or Samsung will offer LCDs out of the box with Android built in one day soon? Or perhaps (a tad far-fetched maybe) but when you see iPads locked in Lucite surely soon a network operator (or retailer other than Apple) will create a cheap, instant, interactive ad-network by hanging encased iPads on walls? 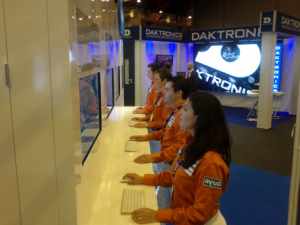 Scary but true that a USD 499 all-in-one solution like this might work out to be much cheaper than a PC and a separate screen configuration (which doesn’t even give you touch).

It would help of course if the screens were a little bigger but rumour is that Apple is releasing a 52 inch screen with built in iOS or Apple TV (and okay so they flopped initially but there is little doubt that Google WILL be releasing many more types of Google TVs).

Anyway, as far as we know Ayuda is the only digital signage vendor to support all four major desktop and tablet operating systems; Windows, Linux, Android, and iOS.

Ayuda’s Splash Player will continue to exist having, as it does, custom hooks into Ayuda’s own Splash CMS.

The OpenSplash player is of course owned by the community and users are free to LGPL against that also.

This is common in the open source world. The popular SugarCRM (Customer relationship management software) for business has an open source ‘community’ version and a commercial version which follows the same paradigm described here

This entry was posted on Monday, May 23rd, 2011 at 08:00 @375 and is filed under DailyDOOH Update. You can follow any responses to this entry through the RSS 2.0 feed. You can leave a response, or trackback from your own site.

One Response to “Apple Store 2.0 Ought To Make A Splash”