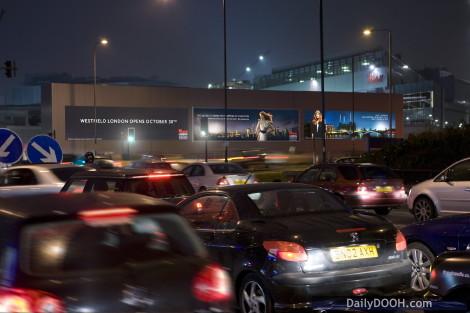 The much anticipated Westfield shopping centre in London opens this week of course (30th October 2008) and whilst CBS Outdoor are doing the insides (we will be reporting on that near 100% digital initiative separately later) it’s Ocean Outdoor who have won the contract, worth an estimated UK PDS 70 million, to do the external advertising AND by the look of things we are going to see even more digital!

Damian Cox, their CEO told us that “the Holland Park Screens are just the start of a significant structural roll out in late 2008 / 2009.”

Ocean Outdoor specialises in premium, high-profile, large format outdoor advertising locations. Its mission is to secure the most sought after media platforms and provide an unbeatable service to both landlords and advertisers.

This entry was posted on Monday, October 27th, 2008 at 10:34 @481 and is filed under DailyDOOH Update. You can follow any responses to this entry through the RSS 2.0 feed. You can leave a response, or trackback from your own site.