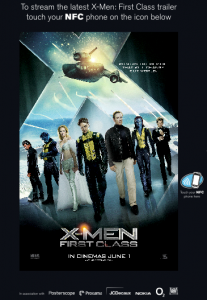 [1]It’s a real shame that there are only five central London bus shelter poster sites that make up the trial but James Davies, Director at Hyperspace, Posterscope’s innovation and digital division was quick to point out that the main objective at this stage is to demonstrate the most basic level of content to agencies and then talk / convince them about how much further they could go.

I would like to have seen them come up with something a bit cleverer than a film download – didn’t the ‘download a film trailer’ boom go the way of Bluetooth? but I understand James’ point about keeping it simple and it being a technology demo.

James is right in what he says in the press release “What is so exciting about this layer of interactivity is its simplicity and the size of the opportunity for generating scale. There are 130,000 commercially available poster sites in the UK that can be instantly enabled. For the client the cost of each NFC chip is extremely low and the consumer receives instant fulfilment. The potential application of this technology is immense”.

There are 130,000 posters out there and somehow the industry needs to come up with some really compelling examples of how best to demonstrate NFC.

2 Comments To "How Best To Demonstrate NFC?"

As with QR Codes, NFC is just a means to trigger an action on the phone (albeit NFC also offers payment capabilities).

In future it would be nice to see advertisers investing in mobile optimized micro-sites that offer a range of goodies/offers for the person that has made the effort to interact with the advertisement.

[…] Back in May in London we had Posterscope (partnering with Nokia, O2, Proxama and JCDecaux) launching the UK’s first NFC-enabled poster campaign (each site had a pre-programmed NFC chip affixed to the rear of the poster) and now we see that in New York, Los Angeles, Chicago and Boston Vitaminwater is highlighting its ‘energy-boosting’ properties with bus shelters equipped with a 5-volt battery-powered USB port. […]