We’ve continued to have such a good response to our posts The Month Ahead (May 2011) (and April 2011) and our Industry Events Calendar (middle right of our home page). 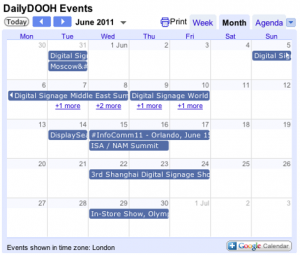 The week after on Tuesday 14th June is the DisplaySearch Digital Signage Conference in Orlando and of course immediately following that, also in Orlando this year, is #InfoComm11 on the 15th – 17th June.

The International Sign Association (ISA) is joining the National Association of Manufacturers (NAM) for a summit with sign manufacturers in Washington on the 15th and 16th June.

As usual, a special thanks to all those event organisers who have sent us dates for the events which we were missing (and please keep ‘em coming).

This entry was posted on Tuesday, May 31st, 2011 at 07:15 @343 and is filed under DailyDOOH Update. You can follow any responses to this entry through the RSS 2.0 feed. You can leave a response, or trackback from your own site.