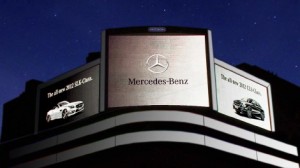 The dynamic 10’ high by 60’ wide digital spectacular offers unparalleled colour and clarity with bands of LED lights that surround the board with eye-catching colour accents.

“This landmark digital display raises the profile of one of the busiest entertainment and advertising areas in Toronto,” says Randy Otto, president, Pattison Outdoor Advertising. “The installation of this 90th digital display is yet another milestone for us and we look forward to bringing advertisers more innovative out-of-home products as we continue to expand our digital advertising networks across the country.”

Visible from Yonge-Dundas Square, this striking digital billboard is located on the north-west corner of Yonge and Edward Streets. The Media Beacon is 736 sq. ft. and consists of three displays that can be used as one spectacular or divided into multiple configurations.

Mercedes-Benz, one of the premiere automotive innovators, is the first advertiser to use the Media Beacon and showcase two of its new 2012 vehicles.

“Part of our challenge was to seek out never- before-seen media opportunities to feature these stunning new vehicles,” says Marc Boderke, vice- president of marketing, Mercedes-Benz Canada Inc.. “The Yonge Street Media Beacon is an opportunity to reach a successful and urban audience in a ground-breaking way.

“As the inventors of the automobile 125 years ago, Mercedes-Benz is the epitome of innovation. The use of the Beacon will help portray the CLS and SLK as the ultimate expression of style and design, and will capture the attention of passers-by and deliver impactful fascination in the way that only Mercedes-Benz can. The Beacon is a prominent feature of our overall media launch campaign.”

This entry was posted on Tuesday, May 31st, 2011 at 09:00 @416 and is filed under DailyDOOH Update. You can follow any responses to this entry through the RSS 2.0 feed. You can leave a response, or trackback from your own site.