3DFusion Corp. , New York, has announced a joint collaboration with Cirque Du Soleil and the Mirage Hotel in celebrating the 5th anniversary of the Beatles ‘LOVE’ theatrical extravaganza. 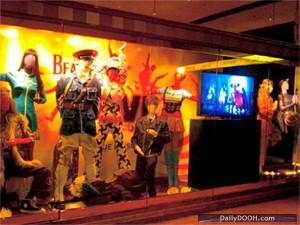 Showcased at the Mirage Hotel in Las Vegas, 3DFusion has introduced its 52″, glasses-free 3DTV display, featuring the Cirque Du Soleil ‘LOVE’ performance, currently on stage at the Mirage.

“The Mirage Hotel ‘LOVE’ 3D display is the first of many 3DFusion installations planned for the Las Vegas area,” says Paul Cohan, President of Frahan Solutions Inc, the 3DFusion marketing firm that was instrumental in putting together the Cirque-Mirage 3D promotional package.

Lou D’Angeli, president of Cirque/RSD, wanted to add another dimension to its smash hit ‘LOVE’ Beatles-themed show. Working with the award winning Cimarron Group and its president Bob Farina, it decided to showcase scenes from ‘LOVE’ and spotlight them on 3DFusion’s 52″ auto stereoscopic display.

“Since we are working with such remarkable images, we wanted to clearly convey the artistry and wow factor and draw viewers right into the show,” says Farina. “Add to that an amazing Beatles soundtrack; we had the added task of making the imagery compliment the audio, a real labor of LOVE”.

“The Mirage Hotel is happy to house this ground breaking technology,” says David Seifert, Mirage Hotel manager. “It looks fabulous, this is the wave of the future”.

“I think the 3DFusion screens and their ‘LOVE’ content conversion is amazing,” says Jennifer Seigler, Cirque marketing director. “People stop in their tracks to watch…become instantly engaged. This is just the thing for our shows.”

“Our 3DTV platform clearly illustrates what 3D television viewing should be,” says Ilya Sorokin, 3DFusion CEO. “We have not only solved the 3D glasses issues without sacrificing picture quality, but we have developed the complete A to Z 3D technology upgrade as a seamless replacement for conventional 2D television.”

3DFusion has also been commissioned to install their 42″ 3D ASD Display in the esteemed Grammys Museum in LA, as another joint project with Cirque Du Soleil. The 3DTV will be available for viewing after the second week of June this year.

This entry was posted on Wednesday, June 1st, 2011 at 05:01 @250 and is filed under DailyDOOH Update. You can follow any responses to this entry through the RSS 2.0 feed. You can leave a response, or trackback from your own site.