The InfoComm organisers’ failure to choose the best hashtag (only our opinion of course – although in our poll 83% of respondents agreed that our recommendation of #InfoComm11 was the better one) and subsequent non enforcement / encouragement to standardise on a single hashtag (or at least the one that the majority of the #AVtweeps twitterati preferred) is somewhat dividing (and diluting) the pre-event online conversation via twitter. 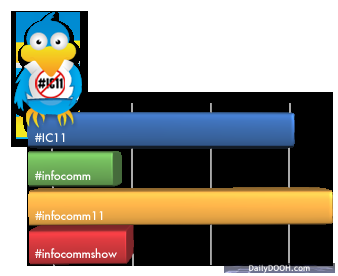 In the last month, as people get excited about next week’s show, we have seen twitter traffic increase significantly.

Scarily though for all those who want one single place to share their InfoComm experience (and that is of course the paying exhibitors and the show’s attendees) any online conversation is NOW spread across four hashtags!!

We stripped out dozens of Imagine Cup related tweets in the #ic11 hashtag from our servers that monitor the activity but still came up with..

Included in all of those tweets in the last month are 300 duplicates – i.e. folks ‘hedging their bets’ and including more than one hashtag in a tweet.

Our strong recommendation remains the same as before however AND is generally supported by the top guys and gals in #AVtweeps (and the mighty Jason Cremins) and that’s to stick to using ONLY #InfoComm11 in your tweets – that’s both descriptive of the event and unique enough as well as being year specific.

This entry was posted on Monday, June 6th, 2011 at 15:10 @673 and is filed under DailyDOOH Update. You can follow any responses to this entry through the RSS 2.0 feed. You can leave a response, or trackback from your own site.