The multitouch wall, comprised of four 46” MultiTouch Cell displays, has been installed in conjunction with NASA’s commemoration of the 30th anniversary of the first Space Shuttle launch, STS-1, on April 1, 1981. It is permanently installed in the center.

The multitouch wall will provide high-resolution photos and videos of the Space Shuttle, which multiple users can manipulate simultaneously. This initial installation is part of the first phase of the exhibit, which will eventually include the full space shuttle, space station, and Apollo mission histories.

MultiTouch and FusionPage collaborated over a three-month period to develop the specifications and the system design for the multitouch wall.

The multitouch wall provides high-resolution photos and videos of the Space Shuttle, which multiple users can manipulate simultaneously. This initial installation is part of the first phase of the exhibit, which will eventually include the full space shuttle, space station, and Apollo mission histories.

“The rich archive of high-resolution material, even analog high-definition video, over the past 30 years provides us with a tremendous resource for an exhibit that delivers, literally, a hands-on interaction with space history,” says Paul Spana, exhibit director of Space Center Houston. “NASA commands some of the most passionate museum visitors in the world, and we now have an attraction that enables them to interact in a new way.” 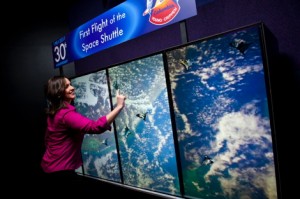 “High-resolution photos and videos are an attraction for multitouch users, and the level of documentation available on STS-1 makes this a particularly compelling installation, and one that will have tremendous use,” says Timo Korpela, general manager of MultiTouch Americas. “NASA helped pioneer high-resolution imaging, as we know it today, and using their archives for such an historic exhibit, for a multitouch experience, is an unprecedented opportunity for us.”

For FusionPage founders Don and Ron Kerr, the exhibit marks a personal reflection, as the brothers served with NASA in various capacities, and have contributed to various NASA projects in subsequent years.

“We are delighted to be part of this exhibit, which celebrates 30 years of flight for these amazing space vehicles,” says Ron Kerr, CEO of FusionPage Interactive and former NASA flight controller. “We were particularly thrilled to have the opportunity to develop this permanent installation. It’s a way for us to give back to NASA and Space Center Houston after our many great memories of working here.”

MultiTouch is headquartered in Helsinki, Finland, with U.S. offices in Santa Clara, California and New York City. Introduced to the global market in 2009, the MultiTouch Cell product family has been sold in more than 40 countries. FusionPage is a MultiTouch reseller.

MultiTouch will demonstrate the installation, using a four-display wall, at the INFOCOMM exhibition in Orlando, Florida, from June 15-17, in Booth #4382 at the Orange County Convention Center.

This entry was posted on Monday, June 13th, 2011 at 13:05 @587 and is filed under DailyDOOH Update. You can follow any responses to this entry through the RSS 2.0 feed. You can leave a response, or trackback from your own site.

One Response to “Multitouch Wall At Johnson Space Center”