JCDecaux has unveiled the first D400 (a digital 96 sheet), a digital Première billboard on London’s Cromwell Road – adding to the 5 x 5 meter i announced last week and a whole host of other digital faces that the intrepid road traveller will see to and from their journey to London from the west. 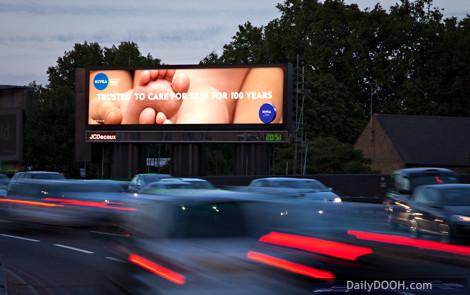 The launch advertisers on the D400 are: Beiersdorf (100 years of NIVEA skincare), Twentieth Century Fox (X-Men: First Class), energy company Statoil and Alfa Romeo (for the launch of the Alfa MiTo Sprint).

Peter Skarparis – Comms Planning Manager, Carat told us ‘’Working with Posterscope to add as much value for Beiersdorf’s (NIVEA) new branding campaign, we were excited Beiersdorf could be a launch partner on this new digital site in London. The site adds a further premium element to the campaign, whilst increasing stature, reach and impact that this campaign so importantly requires.‘’

Spencer Berwin, Managing Director Sales of JCDecaux added “The D400 is ideal for brands wanting to drive their message home with rapid updates, multiple creatives and time-sensitive announcements on this fantastic new inbound location on the Cromwell Road.”

Once again it’s running BroadSign software and we believe that the 10mm LED is from Shenzhen AOTO Electronics Co., LTD. in China.

This entry was posted on Tuesday, June 7th, 2011 at 16:11 @716 and is filed under DailyDOOH Update. You can follow any responses to this entry through the RSS 2.0 feed. You can leave a response, or trackback from your own site.