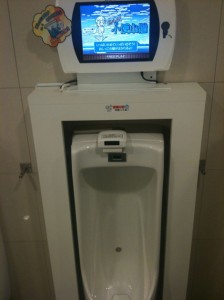 [1]A crowd pleaser here at #dsj2011 was the Sega urinal signage. Yes that’s right digital signage in the shape of a Sega games console stuck above a men’s urinal complete with a sensor.

SEGA’s urinal game interface ‘Toirettsu’ (in English ‘Toilet’) encourages (a) peeing on target, (b) measures your urination amount and (c) helps keep the toilet clean (we assume due to the ‘on-target’ bit).

The device itself is a regular stand-up urinal with a sensor at the centre, which is activated when liquid (pee, wee, urine whatever) is jetted at it.

When you hit the sensor with urination, a gaming screen at eye level shows your score, estimated amount of your output, alongside various advertisements next to the game screen. 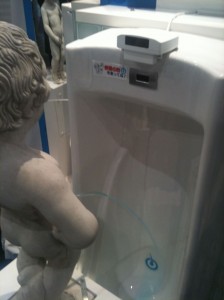 [2]The small display above the urinal measured ‘output’ in true video game style.

In the booth they had a small statue that seemed to be a cousin of Manneken Pis [3] (the little guy from Belgium) as shown here to the right.

This is definitely not for anyone with a shy (or indeed a weak) bladder AND still there is no word on who got the official high score.

I wonder if Intel AIM is integrated. It could open up a whole new audience profiling option 😀

This seems to be a good opportunity for Above the urine advertising.

As they say in UK, “I think they’re taking the pee”.

This is a brilliant idea. It is also funny as hell. I could perfectly imagine going to work every morning on that project and having the time of my life just making comments about it. hehe.

Did the Corporate Meetings have a bunch of VPs deciding if they should measure, analyze and target different condom adverts based on the scann results…

No matter how you look at it, its funny.

Sega are just taking the piss 😉

How long will it be before these urinals are installed in pubs to tell you if you are too drunk to drive? I should copyright that!

Now we can charge advertisers based on CPeeM!

They are beta testing a model for the Congressional Office building that is integrated with yfrog and Twitter.

Advertising for ONLY half the population?

Equip the ladies with a SheWee and you have a business!!

Clearly inspired by the stickers of Flies on urinals in Amsterdam Airport (I think) a few years back – the results being significant reduction in cleaning due to accurate aiming!