It’s no magic but sheer planning that has Black Magic Design [1] of Pepperell, Massachusetts, entering the world of digital signage. 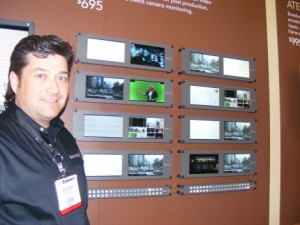 [2]After buying Echolab [3] video production studios, the company has expanded its products, and now not only services the AV sector but also has launched its routers for DS monitors. It has also launched Smart View Duo, two adjacent 8” LCD monitors geared for use in elevators, television stations, retail stores and other areas where mini screens alone or in multiples can be used.

The company already feeds the 34 monitors for screens indoors and outdoors for the Modell’s Sporting Goods [4] stores in Times Square.

“With our DS routers, we can do 288 at one time and offer about 50% savings from the average,” says Terry Frechette, marketing communications manager. “Cost of 16 inputs and 32 out would be about $2,995.”

The Smart View Duos are $695 for the two screens. They have small inputs in back for either video or still images, and can be used with any type of player, a PC or the customer can buy a Black Magic router router and operate a whole wall of the mini screens.

The company also offers a production switch (to run with software) allowing live production to screens for live events.

“We can connect six cameras plugged in for $995,” says Frechette. “This ATEM Television Studio does away with the need for parking a big production truck at live events.”