Interactive touch screens displays are a recurring theme through out #InfoComm11. Vertical or horizontal, everybody was encouraging visitors to leave their fingerprints on their screens. The number of people that could interact with the displays at any one time varied from one, two, four up to 50 interactive points on the Microsoft Surface table. 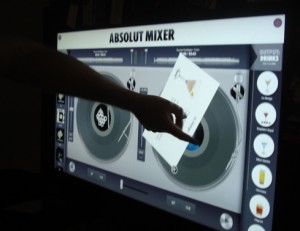 Samsung and Microsoft partnered to create the second generation of the interactive table.
Samsung SUR40 for Microsoft Surface with PixelSense. I did try to get 50 people in the demo room to see if the claim of 50 points of contact was true, but no more than 10 fitted in the heavily air conditioned room. The table is very good and offers great possibilities for creative applications. It can recognize QR codes and by tag information just by placing the codes on the table. A brochure, for instance, could have a QR code and as soon as it is placed on the table it will offer a window and a link to get more information. The reaction time on the interaction is really quick.

A company showing its interactive initiatives was also Christie, which had a whole interactive Christie MicroTiles wall. The Christie i-Kit touch interactivity kit, powered by Baanto ShadowSense, and the Christie JumpStart software and media server, had people constantly trying it out. The responsiveness of the interaction can be improved, but this area of the huge Christie stand had a significant number of audience dwelling and observing. Christie i-Kit Allows End-Users to Pinch, Flick, Rotate and Scroll through Touch Interactivity.

The Christie i-Kit, a multi-touch interactivity kit suitable for large format displays, attaches to the perimeter of any large arrayed display up to 16 x 6, including Christie MicroTiles, allowing multiple users to interact simultaneously with a rectangular video wall with sufficient resolution and speed to support finger-based gestures.
Touch interactivity is rapidly growing and evolving, and the Christie i-Kit delivers an affordable high-performance solution for dealers and system integrators. The Christie i-Kit has a one-year parts and labor limited warranty with demonstration units available in October.

Easy to install and operate, the innovative Christie JumpStart is an affordable and high performance front-end content solution ideally suited for delivering informative and attractive content to 5-10 megapixel tiled digital displays such as Christie MicroTiles. Targeted at designers, system integrators and rental/stagers in architecture, out-of-home advertising and event production, Christie JumpStart is the perfect choice for tiled display walls requiring up to four video inputs and outputs.

This entry was posted on Friday, June 17th, 2011 at 17:39 @777 and is filed under DailyDOOH Update. You can follow any responses to this entry through the RSS 2.0 feed. You can leave a response, or trackback from your own site.

One Response to “#InfoComm11 Gets Tactile”