This really doesn’t have anything specific to do with Digital Signage, but we noticed this nice public relations gesture from AmpliVox of Northbrook, Illinois, and thought it worth noting. 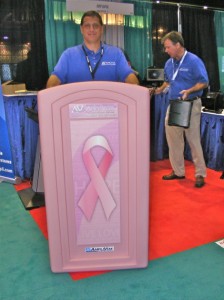 AmpliVox offers this sturdy, one-piece pink plastic full size (46.5″ x 26″ x 26″) podium on rolling castors to any organization running an event to promote or raise funds for breast cancer awareness – free of charge. AmpliVox, which manfactures portable sound systems and podiums, will even handle all shipping costs anywhere in the U.S. – and the organization can keep the podium.

The podium was originally designed as a prototype and Don Roth, AmpliVox CEO, had the brainwave to offer the pink podium – which sports the breast cancer awareness symbol on the front, as way of ‘giving back’ to the community at large.

The organization, of course, has to show its legality, either as being connected with the Susan B. Komen Foundation or with an official letter head and document.

AmpliVox has distributed more than 100 of the pink podiums which would sell for $1,367 each. Depending on the destination, they require between one and five days shipping.

This entry was posted on Friday, June 17th, 2011 at 17:29 @770 and is filed under DailyDOOH Update. You can follow any responses to this entry through the RSS 2.0 feed. You can leave a response, or trackback from your own site.