Observant readers will know that last week, after a very secret squirrel meeting at #InfoComm11 in Orlando we “Learnt of plans of (an) upcoming ‘three most dangerous men in digital Signage’ story” from someone well known in the industry. 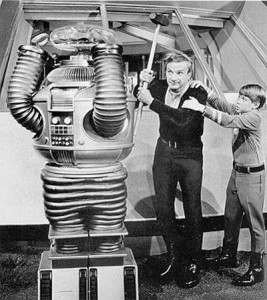 Intrigued we reached out to them to find out more and got permission to take their idea to the next level and gather industry feedback for a fuller, more rounded post.

So. who do you think are the three most dangerous people in the Digital Signage Industry?

We don’t usually encourage anonymous comments but in this post we will make an exception. So come on folks tell us please who you think is doing more harm than good to the industry at the moment?

You can also email in comments. Everything will be kept confidential but bottom line be honest please.

You can trust us to total up all the votes, make a top three and do an extensive write up – even if that includes people we love or even ourselves!

This entry was posted on Monday, June 27th, 2011 at 15:36 @692 and is filed under Scuttlebut. You can follow any responses to this entry through the RSS 2.0 feed. You can leave a response, or trackback from your own site.

35 Responses to “Danger, Will Robinson!”