For a second year running The Screen held a Breakfast Meeting at  Ogilvy Digital Innovation Labs headquarter in Cabot Sq Canary Wharf, sponsored by HP and Ogilvy. It was a full house with 110 people signing up for the event. 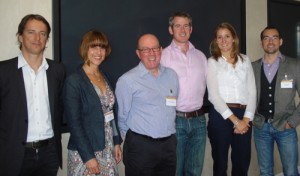 Last year’s event was about content but this year the presenters talked about the natural evolution of content in the DOOH market, interaction.

Campbell began with a look at what’s coming soon. He showed a video where HP’s CTO was presenting Mylar, a silver foil type of plastic that works with OLED technology which is flexible and adaptable to interactive-touch technologies and, apparently, will be 50% cheaper than flat screens.

“Things have changed in the current consumer market. There is a new buying paradigm” said Cambel, “The buying experience starts with research online at home, continues with information we find in our mobile devices and when the customer is in  the store ready tobuy, they want to be able to access information in a similar manner. Touch is a must, you have to think about designing with touch in mind, consider what the best size screen is – bigger is not always better; evaluate screens positioning and invite people to engage, to get involved.”

Marina Clement followed introducing the Ford Augmented reality campaign, which we have talked about in DailyDOOH [2]. She said that campaigns have to go beyond the six sheets standard. The augmented reality screens were located in five big shopping centres across Britain achieving a total of 150,000 interactions Disappointedly, the campaign has no  statistics to evaluate what impact has this experiment had in the sales of the product or  who was really interacting with the display. It’s likely that younger punters were more keen to interact, reducing the real number of potential buying clients. Also 150K interactions in 5 shopping malls over three months doesn’t look like a very high number.

Richard Corbett, from EyeTease Medi [3]a (the company that presented the Mini’s with the screens on the roof at Screen Media Expo) commented, “”Until we get real KPIs to analyse and derive robust case studies from, we have ‘augmented novelty’ instead of ‘augmented reality’.”

Liam Boyle, from Monster Media, presented a wide verity of videos  from projects his company has carried out in the two sides of the Atlantic. He highlighted that creativity is key but you need to have measurement and monitoring  of the interactive exercise to really exploit this medium. “At Monster Media we see a convergence between advertising and entertainment in the shape of games. We take customers on a journey, we offer them an experience and we can report on the results.”

A campaign that Monster Media created for the launch on Intel’s smart TV had 60,000 people entering their personal details on the hope of winning one TV.

But the real wow factor stuff was presented last by mobile consultant Rob Thurner . Smart mobile technology; this is where real measurement  and personalised advertising becomes a reality.

According to Thurner there are three components to today’s DOOH: attraction, which you  can get through clever mobile marketing; interaction, with mobile CRM and mobile commerce which is where you get the call to action and hopefully a transaction.

As well as Boyle, Thurner showed a fair amount of gaming interaction in the most impressive campaigns.

The Screen will make some of the videos from the presentations available next week, so we hope to delight you with the best examples.